The Physical Intelligence of the planet was speaking to us! 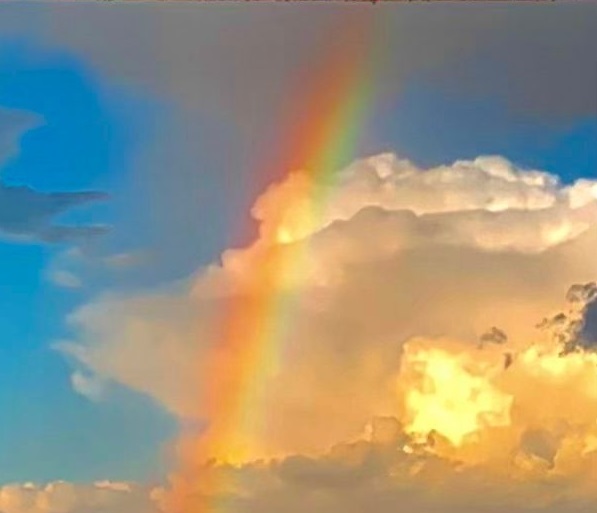 I captured this rainbow picture in real-time during the call!
Higher Marnie Message:
Rainbows represent a full spectrum restore of your internal computer to perfect health, wealth, and happiness.

Beyond a shadow of doubt, this call Rocked!!!

What in your life still feels like a PAIN in the ASS?

Watch this now! It will change!

A few SPOT-ON highlights from the live chat:

Linda: Good to know to keep asking till it is gone!

Linda Zaber: Anything is Possible!

Feel the Unconditional LOVE as you watch!

This is a MUST-WATCH to Maximize Results!

If you feel like you are NOT changing - listen to it right now!

As you listen to each member who shared live, pay attention to how they each mirror similar situations in your life.

This success strengthening call is filled with unconditional love, strong support and higher messages that YOU NEED TO HEAR NOW!

We are a strong team and each success story is your success!

When others change, you change even more with them.

We are an unstoppable team!

I broke the fifth metatarsal bone in my right foot. After having a cast on for 4-weeks, my podiatrist looked at my x-rays and said, in my 14 years of practice, “I have never seen a break like this heal that rapidly!” And I’m not a spring chicken.

I know doubt creeps in. I think it's because when the blocks are removed what unfolds in your life seems like it would have happened anyway. But I know Beyond the Shadow of Doubt that without those blocks deleted things would unfold in a less fortunate way.

There are many instances in my life where I have proven this is true.

It started with back problems from various reasons when I first joined. Took a few sessions, but the Back Problems are GONE and have never returned in the 3 years I have been a member. And they used to be a regular occurrence.

Then there was the Bully at Work. I was bullied every single day for about a year. Marnie worked on it and I have not been bullied since. It just Stopped Immediately, never to return.

Then there was Hurricane Ian that was supposed to be a direct hit right where I live. The last 72 hours it shifted and we did not get the direct hit. Streets on both sides of us lost power and had lots of branches down. We never lost power and had very minimal cleanup needed. Marnie was protecting our home the entire time!

Much love and gratitude to you Marnie and your awesome team.

Tonight, is the three-year mark when my son was lost in Colorado (he got sick and was picked up in an ambulance on October 6th and we found him at the hospital in ICU on October 7, 2019).

He is now happy and healthy and loves living in New York studying photography and video. He has a 4.0 which he never had before, and has new friends.

My Cyst is Gone! OMG! My doctor was amazed and canceled my surgery on the spot!

As Marnie said, I deleted all the issues in my life that were literally a pain in the ass!

I have less anger, less resentment, and less thinking that everyone was at fault! I am nice to myself.

I had a great conversation with my sister. I almost had to pinch myself that it was the same person.

I'm in a better financial position than I ever have been with the idea that there is the potential for it to continue, which is new for me at the age of 61.

Totally new, and I'm loving it, and I also get a sense that it will get better.

It feels like it's a new me and a new beginning!

It's like I'm sliding down the rainbow and into the pot of gold.

I never imagined that I would be in this position.

My perception of my relationships has changed. They're much better and much happier. Everything is shifting and changing for the better. I'm loving it.

This is my message to anybody who's having any doubts - Stick with it!

This method is the best thing on the planet. I don't want to sound like an infomercial, but it's just the truth. Pure and simple.

With the recent hurricane hit and Kam guiding me, I was able to connect to the physical intelligence of the planet to redirect the water to a new direction so it would find another way to go out because with a lot of people it went up six feet I said, just keep your eye on the marker. Within 20 minutes, the water started going down from the flooding, which is incredible. So, it was a whole good learning experience on connecting and using the physical intelligence of the planet for the good. The application is incredible.

I also assisted a family member who was addicted to heroin and drugs for 10 years to a better place. It's a phenomenal story.

I've been using this method on and off, and the biggest mistake I ever made was not continuing. So, I just want to let everyone know to stay in the group! Use what you have. Don't worry about what you don't know. Stay Neutral. Get your family in it. This is the best support group that Marnie and Dr. Kam have brought to the world.

Since I started with the method, there's been no more fights. Like after a few minutes at most, they're quelled, and they don't boil over time. It's beautiful. It really feels like a surgical procedure that's being done to my family to be whole again, and I really appreciated everything that you're involved with.

And it's one thing to be basically pushing yourself like a wagon. When you put your entire family in the membership, it's like the Pentagon of the family begins to synergize. And it begins to grow together, as opposed to one part stretching and being held down by the other parts as well. So, I'd say, you feel you're not doing this alone. It just feels like everyone's doing this together, like you're walking together, as opposed to us running ahead and asking for help.